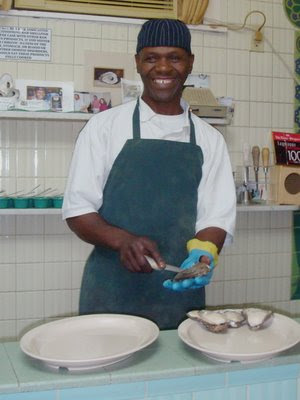 The thing about making art or taking photographs is that history sits on your shoulder. When I was having dinner (dozens and dozens of fresh oysters) at Casamento's in New Orleans, I took a simple photograph of the guy who was shucking the oysters. As it turned out he is a speed champion shucker,with the medals to prove it, who turned out perfect clean oysters even at warp speed.

There were two photographers "sitting" with me that night: August Sander and Walker Evans.

August Sander was a german photographer who started a project around 1910. His aim was to catalogue German Society. His portraits of individuals often show them in their working clothes and sometimes in their work environments, and are captioned by occupation. The Nazis banned his portraits in the 1930s because the subjects did not adhere to the ideal Aryan type. They are powerful and stark (and are vastly better than my snap). 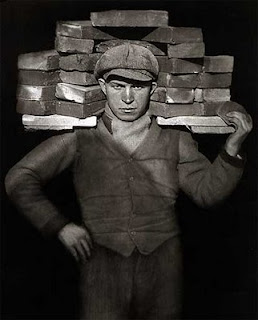 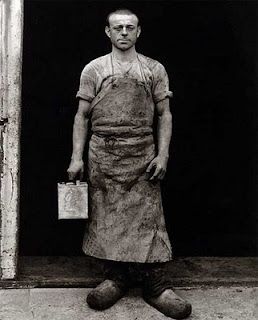 The Walker Evans photographs that came to mind were those documenting the effects of the depression while working for the Farm Security Administration. He worked in large-format emphasizing the plight of the American public during this period of economic unrest. You can see lots of his photographs and even buy prints of the at the Library of Congress online archive. I surf the archive frequently, there's lots to of interest and the search is very good. I love his photographs, own several and have his "Studio" photograph on my studio wall. One truly great facet of the archives is that you can request the "neighboring call numbers" for any image. This gave me insight into how photographers like Dorothea Lange, Russell Lee and Walker Evans worked. You can see how Evens moved into a shot, or switched lenses, or even his editing process. I think the ones with circular holes may be meant to exclude them from ever being printed. Although given what we know about Bellocq, they are actually sort of cool. But I digress, below are two of his portraits of men at work and below a screen capture of one of the search pages with sequential call numbers.

In 1941 Walker Evans and James Agee published the ground-breaking book Let Us Now Praise Famous Men: The American Classic, in Words and Photographs, of Three Tenant Families in the Deep South

This collection of photos is a deeply moving portrait of rural poverty.

Last thought, you know how obsessed I am with "product placement" and rampant American consumerism, so here is another of my favorite Walker Evans. The irony of the Coke ad blinding us to almost anything else in the scene shows he was definitely on to it in the 1930s. Author Naomi Klein, in No Logo

covers this point saying that a documentary photographer like Evans was a "hard-core culture jammer" photographing advertising posters and billboards "in their actual habitat: hanging surreally over breadlines and tenements." So you see, a simple snap, simultaneously a warm handshake and a waltz with history... 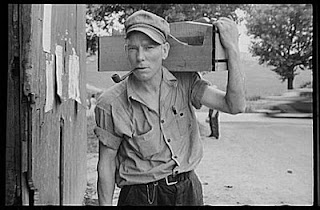 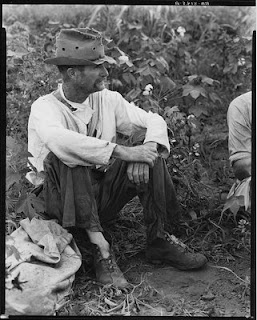 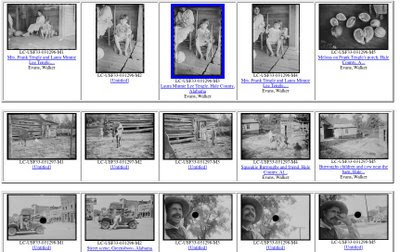 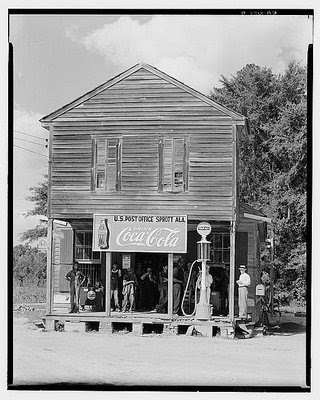 Posted by Susan Shaw Painter and photographer out on the town. at 2:10 AM