Copyright and Fair Use PARTS 2 and 3

"Steal this blog," or rather "Sue this Blog," might be where we're going next in the continuing saga of Fair Use. Copyright infringement lawsuits directed at bloggers and other online publishers are on the rise. According to the New York Times, the number of suits rose more than 500% in 2007. These legal disputes are symptomatic of the ease of “sharing” and the Internet’s link economy. Many web sites post excerpts from time to time, including this one. At what point does excerpting from an article become illegal copying?

The courts have not provided much of an answer. In the United States, the copyright law provides a four-point definition of fair use, which takes into consideration the purpose (commercial vs. educational) and the substantiality of the excerpt.

As Mr. Ardia, whose Citizen Media Law Project is part of the Berkman Center at Harvard Law School said, “New modes of creation, reuse, mixing and mash-ups made possible by digital technologies and the Internet have made it even more clear that Congress’s attempt to define fair use is woefully inadequate.”

For now, Web sites are defining it themselves. Sites like Alley Insider and The Huffington Post are ad-supported businesses that filter the Web for readers, highlighting what they deem to be the most meaningful parts of newspaper articles and TV segments.

The Huffington Post, co-founded by the author and columnist Arianna Huffington, is perhaps the star of the excerpting debate. Ms. Huffington’s editors are especially adept at optimizing the site for search engine results, so that in a Google search, a Huffington Post summary may appear ahead of the original article.

Read the full article in today’s New York Times, it is our future.

See Yourself as Others Sue You 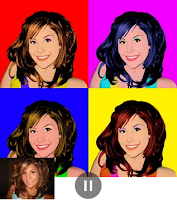 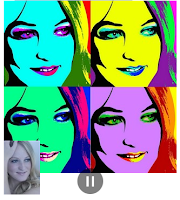 Adding to this is the current rage for portraits "in the style of" that you can create yourself. There are thousands of sites today where you can have your snaphot turned into a "Warhol" for $69.95 canvas wrapped and like they say in the commercials "sofa-sized. " Or perhaps you would prefer an original "Fairey" courtesy of Pasteboard Magazine. To be continued...

Posted by Susan Shaw Painter and photographer out on the town. at 9:13 AM