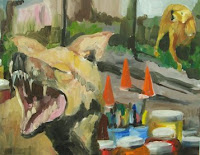 Working Artists and the Greater Economy, W.A.G.E., a group composed of artists are raising their voices and our consciousness about money; but more specifically, about how artists aren't getting their fair share. Artists are frequently invited to exhibit their work in major institutions and likewise curated into important and highly visible exhibitions. Not only does one get nothing at all, but in some cases you pay real $$ for the privilege to compete for these exhibitions. Canadian artists have been entitled to royalties on exhibited works since the late 1980's — something we in the United States only dream about.

Most artists also work a second job just so they can support their art. If 98% of Americans have a moving experience with art at some point in their lives, why do only 27% think artists should be paid reasonably for their labors. Artist moonlighting, that second job beyond art to pay for food, heat, rent etc., is also related to greater levels of education. The most prominent aspect of this trend is that in 15 of 18 survey years, the highest rates of taking a second job were observed for artists with over 16 years of education. I ask you, in what other field do you invest in greater professional education to earn less?

Over the past several decades artists have experienced unemployment rates roughly twice those of other professionals and have had annual earnings on average 30% less than other professionals. We as artists bring tourism to cities, homestead derelict neighborhoods to revive them and generate income for centers of culture. Nationally, the nonprofit arts and culture industry generates $166.2 billion in economic activity every year—$63.1 billion in spending by organizations and an additional $103.1 billion in event-related spending by their audiences. I used the arts and economic prosperity calculator to discover that even if only 200 people see my work this year, I will be worth $35,610 to New York's economy.

And to further stick it to the artists, artists and collectors were entitled to market-value deductions on donations before changes were made to the tax code in 1969, when artists (not collectors) were excluded in an effort to stem abuses of the code (allegedly, artists had been claiming inflated prices for their works). Imagine...you create a seminal work on paper, you spend six months working on it, you have a small studio and can't store it. A major museum curator loves it and offers to take it if you donate it. You figure why not? It's a credential and solves the storage issue. You might be entitled to a tax break of the $25 you paid for the paper and pencils and nothing on those six months of hard work. Yup folks, we can barely give it away!

Go to W.A.G.E.'s site. We need to organize into a powerful voice to shout out for our own economic futures.
Posted by Painter and photographer out on the town. at 6:31 AM

Yes! Finally some light on this crucial issue. We can't all be expert milkers of the system like Damien Hirsch or Jeff Koons but we should be able to do a lot better than we are. The expectation of so many artists to have to moonlight to support themselves has many costs, not the least of which is all the art they are not able to make because of the time and energy soaked up by that 'day job'.

Most of your points make sense except I think it's problematic to celebrate artists because we "homestead derelict neighborhoods to revive them". Yes, that's a valuable service to developers who want to make a killing off of newly-gentrifying neighborhoods and displace low-income folks trying to survive in those "derelict neighborhoods". As an artist I am continuously questioning and challenging my own unasked-for role in the process of gentrification. I think if we're really concerned about economic inequality, not just trying to look after our own special interests, we need to figure out how to be good allies to poor folks in the neighborhoods we often inhabit.